Another great guest this week, in the form of Gillian McAllister. Sunday Times best-selling author, with the TV royalty seal of approval from Richard and Judy, she chats about her journey, her work and the philosophical musings of Taylor Swift.

Read all about Gilly here
https://gillianmcallister.com/

See her on the Richard & Judy Book Club here
https://www.richardandjudy.co.uk/

And listen to her on The Honest Authors Podcast here
https://podcasts.apple.com/gb/podcast/the-honest-authors-podcast/id1194154338

let's try not to mess this one up boys okay

it's not an interview i've set up a mystery guest for next week so someone i'm not telling you whether they are male or female or what they do for a living they're a writer by the way but they are going to be joining us and you don't know who they are oh that sounds exciting isn't it that is that is what a mystery guest is are we allowed any clues no uh just none right okay nothing nothing do we know them um you know of them so so yeah get ready for the mystery guest and if you've got any comments about uh jillian if if you're a fan of jillian or you just want to say hello send us a little tweet or an email yeah you know where to send them by now hopefully but it's failing writers podcast gmail.com or at failingwriters on twitter yeah get in touch it's nice give us a shout and you can find links you can find links to her book and her podcast in our show notes yeah absolutely and um if you're enjoying our podcast do let people that you think would also enjoy the podcast know that you're enjoying the podcast so they can enjoy it too yes screw it tell everyone you never know anybody about it you never know just because gran doesn't write books doesn't mean she won't enjoy the failing writer's podcast yeah grand we're quite popular with grands i think railing writers podcast number one for grand i know a couple of grands that have been injured there we go so uh yeah there you go so join us next week for a mystery guest yeah can't be more exciting than that that is exciting it is exciting exciting yeah exciting all right well let's just say goodbye then shall we tatty bye bye goodbye 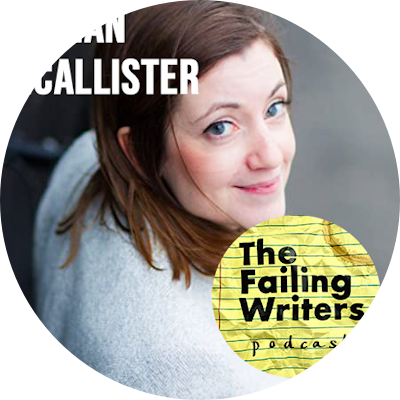