23: Rosie Wilby, a writer's room zoom AND A BIG ANNOUNCEMENT!

This week we've got a big announcement, a great interview with Rosie Wilby, author of The Breakup Monologues, and there's also a rather sizeable announcement. Oh, did I mention we're announcing something? That's in there too.

Find out more about our fabulous guest here
https://www.rosiewilby.com/

You can get her even fabulouser new book here
https://www.amazon.co.uk/Breakup-Monologues-Unexpected-Joy-Heartbreak/dp/1472982304

And listen to her ridiculously fabulous (though not quite as fabulous as ours) podcast here
https://podcasts.apple.com/gb/podcast/the-breakup-monologues-with-rosie-wilby/id1310409996

Have a go at writing for an hour with the, um, writers hour
https://writershour.com/

And finally, get all the details of our BIG ANNOUNCEMENT here
https://www.failingwriterspodcast.com/blog/

you're listening to the failing writers podcast

there we go i don't know if anyone heard that did you hear that that was the end that little bit of silence was literally the end of the interview so it's ended now uh well thank you very much for your time so much for joining me i hope people will keep in touch and uh check out the burka i love to hear what people think of it it's um yeah i'm at breakup monologues on instagram and rosie will be on twitter so keep in touch well thanks rosie have a lovely day what wasn't that nice yeah good stuff that was nice um really what a lovely lady and as we said before you should uh you should go immediately and buy the breakup monologues uh or listen to the breakup monologues podcast wherever what right here wherever you're listening to this podcast you can probably listen to that podcast as well i feel a bit sorry for rosie actually why just because i thought that was a pretty good interview wasn't it was amazing of course it was yeah yeah but then we've got a big announcement coming up and it's just gonna oh overshadow the whole interview is just gonna pale into insignificant people yeah absolutely yeah because it's such a big that goes to klaxon again it's just such a such a huge announcement really is this matter yeah so announce it then tom what is it that we've got to announce to the world exclusively here now uh we're just gonna do like a little writing competition and stuff so it's cool and that's it for this week guys catch us next monday and um yeah we're doing we're launching a flash fiction competition yeah what else it's halloween themed halloween themed yeah what is the most important thing there's a hundred pounds up for grabs 100 cash sterling four ponies five score yeah quick as they call it on the street there what yeah exactly have you got five score quid for me yeah a fifth of a monkey i think they call it there's a hundred got a name um what's a monkey a monkey's 250 monkey's 500 isn't it a ton it's a ton of course it is of course it is i was hoping it was like a bad dress but no it's just it's done isn't it we can call it a badge yeah win a bad jab yeah so 100 100 smackaroos just for doing something you love doing anyway and get to hear your entry if it wins read allowed by professional voice actors uh live on this show hey do you know what else we could do we could even throw in some failing writer's merch yes uh we got money can't buy failing writers t-shirt uh what else we got bookmark marks few but we chuck in a few bookmarks i mean let's just go for it we're really going for it with this competition so yeah flash fiction competition halloween thing it doesn't have to be about ghosts or it just needs to have something about halloween in it it can be anything can it use your imagination yeah be creative so you can find all the details at failingwriterspodcast.com forward slash blog but the most important detail is that in order to enter the competition you have to listen to next week's show episode 24 will contain all of the very specific details of the competition the things you will need to include in the story uh yeah and the winner will be revealed on halloween itself um so yeah theme plaques and noise that you do there for this stuff or not i don't i don't know how do you do

so until then let's just say au revoir 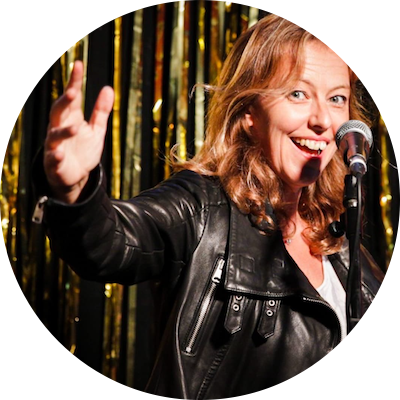 Rosie Wilby is an award-winning comedian, author and podcaster who has appeared many times on BBC Radio 4 programmes including Woman's Hour and Four Thought. Her first book Is Monogamy Dead? was longlisted for the Polari First Book Prize and followed a trilogy of solo shows investigating the psychology of love and relationships. Her new book The Breakup Monologues is based on her acclaimed podcast of the same name.