S1 Ep25: Interview with writer and illustrator Jason Cockcroft... and our own amazing artwork

Season 1
We welcome super talented (and all round super nice chap) writer and illustrator Jason Cockcroft on to the podcast to talk about his latest book, We Were Wolves. And, not to be outdone by Jason's fancy pen work, we try and draw a cow.

no i'm not doing it

guilty looking cat next to him that's the cat there with a thought bubble going why are you not getting any [ __ ] museums now for free are you a bastard i can draw cats not dogs obviously yeah don't let's not old wounds over the dog well thank you very much jason it's really kind of thankful and thanks for having me absolute pleasure you're very welcome thanks for coming i should mention sorry i nearly forgot if um i should mention to our listeners if you want a taster of jason's incredible variety of work have a look at the little yellowbird dot co dot uk and i'll knock your socks off and also his short stories you can check out what's that one love like atoms.com that's like atoms.com yeah brilliant but we'll put all the links in the episode notes anyway uh including a link to uh including a link to the book we were wolves yeah and a link to pet peeves about artists i want yes definitely like why do they wear berries all the time oh that doesn't make sense yeah bouncing around what's your biggest pet peeve about artists jason um like the ones you've worked with or been at college with or whatever or what was that they're very vulnerable to criticism

oh jesus i got quite big

tommy yeah what's happened to his ears what

they were very much yeah that's very much an afterthought

well there we go yeah well yeah i think we've proved the point there how to bring this illustration special to a perfect end and if you want to see them just uh pop along to failingwriterspodcast.com and go to the blog and you'll find it yeah and then leave it leave us a review not just of the podcast but of our individual artwork as well yeah yeah or send us send us a picture of your cow and and uh that's a good idea maybe the future podcast we'll discuss it oh well that's lovely isn't it so what we've got coming up next week next week we are going to have our brainstorm oh yes which is which is like a whole new chapter in this podcast bit of a separate adventure that's going to be running through yeah this is kind of an ongoing one as well isn't it yeah so we'll leave that we'll tease it we'll tease it forward let's not give away too much yeah have a listen next week and uh join us on a journey of probable failure almost certain failure yeah but until then dear listener um goodbye goodbye oh hang on don't forget oh don't forget if you like the podcast mention it to like-minded folk you know send a little tweet out if you want don't hold don't hold it all inside yeah yeah share the love share it around enter the competition into the conference 100 pounds and then spend that hundred pounds on stamps and send people letters telling them to listen to the podcast it's only fair

cheerio then everybody for listening goodbye 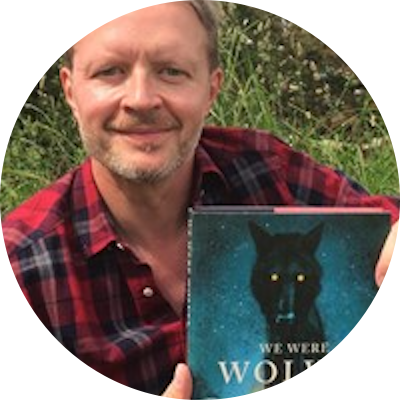 Jason Cockcroft was born in New Zealand, and raised in Leeds, West Yorkshire. He graduated from Falmouth School of Art. He is the illustrator and author of over forty books for children, and he illustrated covers for the last three books in the Harry Potter series.

Jason has been nominated for the Kate Greenaway award and he won the inaugural Blue Peter Book Award. He is also an accomplished watercolour artist and portrait painter.

When he’s not drawing and painting, he’s usually drinking tea and staring out of the window at nothing in particular. He’s very happy to live in a beautiful city that sounds like church bells, smells like chocolate and is invaded by Vikings all year round.